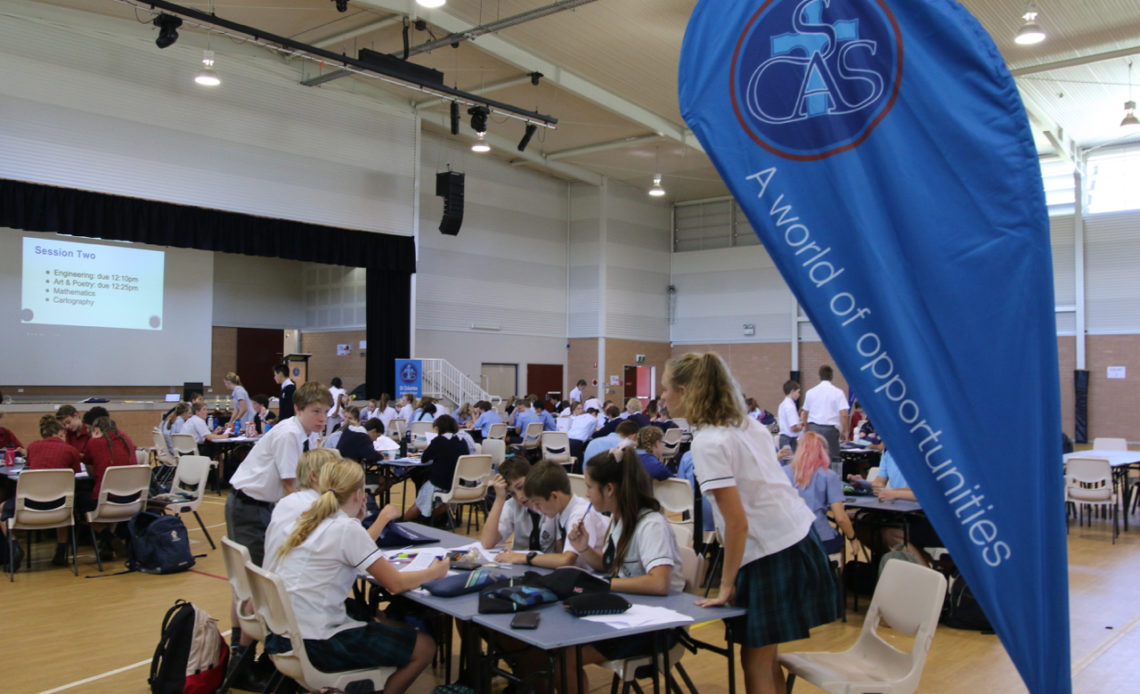 Surely the idea of putting 170 students in one space and expecting them to work through a series of imaginative, difficult and technical tasks would be a teacher’s worst nightmare!? Quite the contrary!

If you had stepped into the Iona Sports Centre in week two of this term you would have seen what can happen when a large number of students are challenged, engaged and given the opportunity to use their varied skills and interests to complete a series of team “quests”.

And the supervising teachers simply scored the results. No discipline required except self-discipline.

Why da Vinci?
Leonardo da Vinci (1452-1519) was one of the world’s greatest thinkers and scholars. da Vinci demonstrated an ability to perceive the interconnected nature of knowledge and embraced learning with a lifelong passion and determination to uncover the unknown. The Decathlon competition places a particular emphasis on higher-order thinking skills, problem solving and creativity.

“I love those who can smile in trouble, who can gather strength from distress, and grow brave by reflection. ‘Tis the business of little minds to shrink, but they whose heart is firm, and whose conscience approves their conduct, will pursue their principles unto death”

In our second year of hosting the Decathlon, the number of students and schools doubled. Students came to SCAS from all educational sectors, eager to compete, eager to try, eager to challenge themselves.

One teacher whose students travelled down from Nambucca Heads commented that his students were as excited after a full day of work, as they were at the beginning of the day. “They just couldn’t stop talking about what they had done, what they had learned and how they would do even better next year”.

A teacher from Newcastle informed me that one of her Primary School students started travelling at 4.30 a.m. to board the bus bound for Port Macquarie. And she was looking forward to doing it again next year.

The winners over the three days will be supported in attending the NSW titles at Knox Grammar School in Sydney, where they will compete against some of the best young minds in the state.

Led by the Director of the SCAS Learning Centre, Mr Chris Delaney and supported by SCAS teaching and administrative staff (in particular Ms Liza Howard), over 600 hundred students, were challenged, stimulated and fed, coming together in the joy of imagining, planning, designing, interpreting and creating.