So it did not work out….. Dealing with “failure” 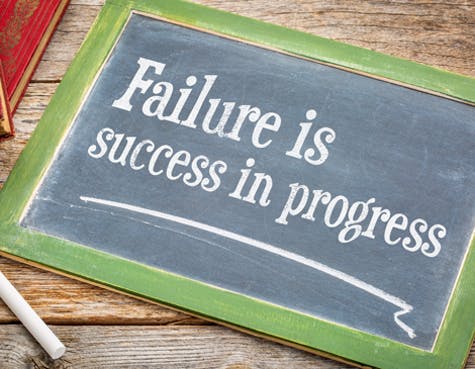 I sometimes worry for students who have never failed, come second or had to face up to a serious mistake.

If they have been fortunate enough to get by on talent rather than hard work, never had to worry about learning new skills or feeling left behind, it can come as an ego-shattering shock when misfortune finally finds them.

They have no resistance and it is often a  much worse shock for them than for those who have experienced the pain of failure and learnt how to rise up from the floor after it!

At the time of a failure all the cliches about “Failure being the first step to success” and the like are more like salt in a wound, than reassurance.

One of the key skills in dealing with failure, is how to move on when the world seems to have dumped a large measure of garbage on your dreams and efforts.

So rather than let the wounds of failure or rejection fester, it is a good idea to have an “ego first aid kit” ready. This kit could include the following psychological bandages:

Acknowledge the Emotional Pain: Rejection often triggers painful emotional doubts about our own competence and self-worth. It is important not to dismiss how you are feeling. Being rejected hurts, and the physiological response it creates in our bodies and minds is akin to physical pain. The reason a negative reaction or rejection causes such strong emotions traces back to our primitive history, when having to leave the tribe after a rebuttal might have resulted in physical danger or even death. If rejection didn’t hurt, our ancestors might have put themselves in harm’s way by storming off into the path of a wild animal or an armed enemy. When you recognise that the emotions you feel are both primal and normal, it can help you move past the ache faster.

Ask Yourself, “Was it me, was it them, or was it us?”: Was it something I did wrong or failed to do? Or was it that the other person couldn’t see the  potential and the value I have or see the effort I made?  The reality is that sometimes you miss the key messages in the assignment or don’t fit the team etc. It doesn’t mean you or the other person were “wrong”. Recent studies confirm that when people attribute setbacks to lack of fit instead of blaming themselves or another person involved, they’re less likely to give up and more motivated to improve.

Embrace Your Strengths: Sometimes “failure” is a great way of reassessing not only your talents but your desires. It can be a chance to find new paths that will actually satisfy you more than following the “normal” path. Making a conscious effort to look forward rather than back can lead to personal growth and the discovery of creative options. Being able to identify the silver lining in a perceived failure or missed opportunity can help you move on to bigger and better things — while maintaining your self-confidence in the process.

Soon you will learn that the “failure” is not the important thing (no matter how embarrassing), it is how you recover from it and learn from it!

“It’s not how far you fall, but how high you bounce that counts.” Zig Ziglar.

So move on. Once you have bandaged your wounded ego, try these steps:

How to Recover From an Epic Fail