In 2011, SCAS Alumna Courtney Krahe completed a Certificate III in Events Management at TAFE whilst completing a Cert III in Business Administration at St Columba.

In 2012 Courtney was fortunate enough to be a Rotary Youth Exchange student to France – District 1720 and was hosted in the town of Montargis, 100kms south of Paris. During this time she had six host families, went to high school and saw some amazing sights in France and Europe. Highlights included a 12 day bus trip with 40 other exchange students through Germany, Czech, Austria and Italy.

In 2013 Courtney returned to Australia and commenced studying at the University of Technology Sydney (UTS) in a Bachelor of Management in Events and Leisure and a Bachelor of International Studies (majoring in French). In August 2013, she joined the Rotaract Club of Sydney City. 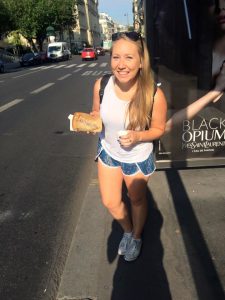 Courtney’s favourite day in Paris – started with a crepe and a coffee before going to the Eiffel Tower, riding a bike down the Champs Elyse and the Louvre.

Throughout 2014 Courtney helped create the Rotaract Club of UTS and was charter Vice President.

In 2015 Courtney interned as volunteer manager at Activate UTS (formerly the UTS Union), and was also Vice President to MuscUTS (UTS Music Society), UTS Rotaract, and HUTS (Housing UTS Society). She also became a Residential Networker (RN – other universities often call them RAs) and helped look after the well being of students living on campus.

In 2016, Courtney was offered a job in the office of the Aerial UTS Function Centre as Functions Facilitator organising catering for events on and around campus. This full time job combined with a full time study load to finish her degree as well as being President of UTS Rotaract definitely kept her busy!

Courtney’s graduation present to herself was a three and a half month holiday across Europe and the USA from July-October. Countries visited include Croatia, Russia, Serbia, Poland and France.

2017 now sees Courtney settle into full time work at Aerial and having zero responsibilities or study for the first time in what she says feels like forever!

Save the Date: 20 Year Events

Tim and Jarvis have been accepted into the Australian Volleyball Academy