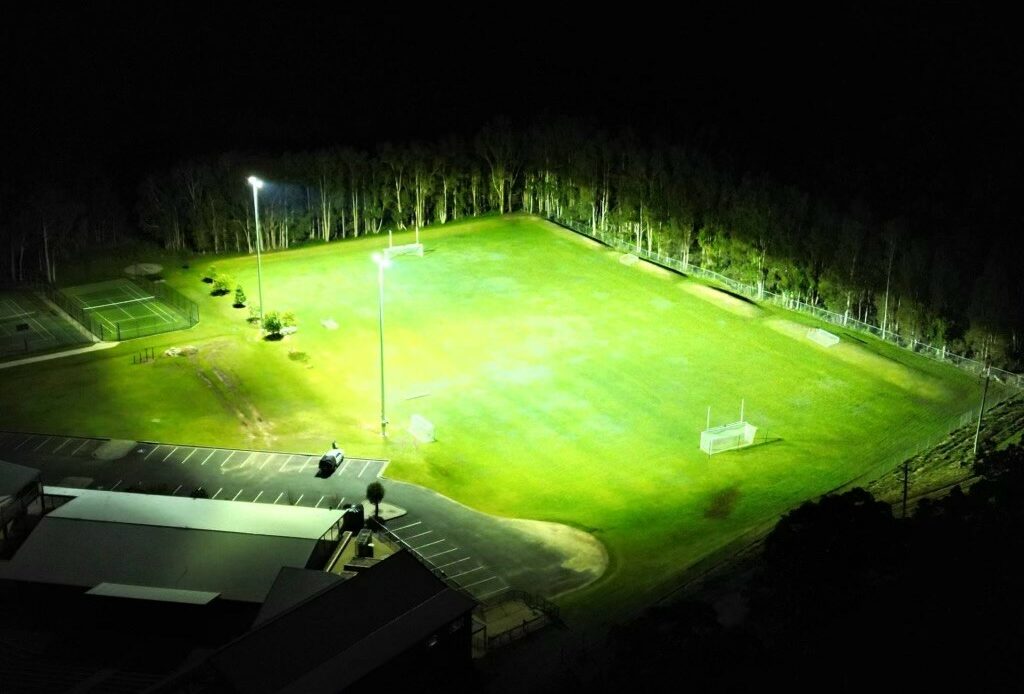 Local sports clubs will be able to enjoy the benefits of new LED lights, allowing playing hours to be extended into the night, thanks to new sports field lighting which has been installed on the St Columba Anglican School rear oval, in a partnership between Northern NSW Football with support from the home-ground teams of Iona Sports Club.

Iona Sports Club was established in 2018 and has been growing every year. The Club offers football, netball, basketball and volleyball, with 440 currently registered players for football (Iona FC), 26% of which are female. Currently around 75% of the teams are made up of SCAS students, and 25% from the local community.

During the 2022 season, in the competitive age groups 12 and above, Iona Sport Club were the only club to have semi-finalists in every grade they competed in – U12s (2 teams), U12 girls, U13s, U14s, U15s, U18s and Open Men. With 37 teams, from U6 to Open Men’s, their growth and expansion into the senior age groups has created the need for additional training time into darkness.

Planning for front and back oval lighting began several years ago with then SCAS Business Manager, Garry Clifton, and Iona Football Club President, Tony Judge, supported by the Iona Sports Club Committee. Tony Judge then approached the Northern NSW Football Facilities Fund, and in July 2019 was successful in receiving a grant application of $43,250 for installation of field lights at the grounds, which was matched dollar for dollar by St Columba Anglican School. Paul Oppedisano from PJO Electrical was then contracted to carry out the extensive installation work involved.

Iona Sports Club Secretary, Mr Laurence Barlow, said the additional lighting will help to extend playing hours at the club and fields, and boost engagement in sport for the area.
The lighting will allow for extended usage of the fields and enable clubs to train at night which makes participating in sport easier for families because they can train and compete after school and work.

Staying active and healthy is an important part of our lifestyle in the Hastings region and we are committed to providing opportunities for our community to take part in physical activity. This is a practical investment that will help our community clubs grow and encourage more people to take up sports.

Campus Manager at St Columba Anglican School, Mr Chris Moss, welcomed the lighting upgrades saying they would provide the opportunity for sports fields to be better utilised during the shorter winter days and allow teams to train in the cooler evenings during our hot summers.

This season has seen a number of teams unable to host games due to wet weather and that may continue into next year. The addition of the lights will put the School in a position to transfer additional games to their fields, helping keep other clubs playing matches and in the competition.